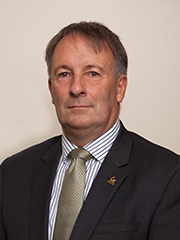 John joined Council as its Chief Executive Officer in March 2016.

He was previously the Chief Executive Officer of Loddon Shire Council, a position he held since 2005.

John, who has a wealth of experience in Local Government, was previously the Director Operations (and formerly Director Technical Services) at Loddon Shire Council since local government amalgamations in 1995.

A qualified engineer, he has also held engineering positions at the Shire of Rosedale, City of Broadmeadows and the Shire of Colac.