Home > About Council > Council Overview > Plans and Strategies > Robinvale housing and population
The population study revealed an estimated population of between 7000 in November and 8800 in March each year – far more accurate than the ABS estimate of 3359. 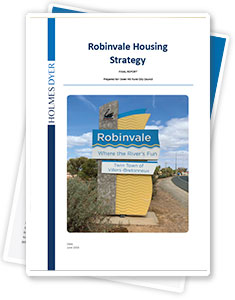 The population study revealed an estimated population of between 7000 in November and 8800 in March each year – far more accurate than the ABS estimate of 3359.

Banking information was key to this. Consultants also looked at Lower Murray Water data, and spoke to 13 local service providers. For example, supermarket data showed a grocery spend much higher than you would expect for a town of 3359.

This is a critical piece of work that we will use as we look for a better deal for Robinvale, for health, education, housing and all kinds of other services. It will also be made available to all Robinvale service providers to seek better outcomes too.

The housing strategy delved a bit deeper into the current situation and possible solutions.

It confirmed something we all know – there is no magic bullet to fix the housing problems in Robinvale. But, the document has provided five clear strategies to ease the pressure.